The Bodybuilding.com series is a success!

The fifth and final "webisode" of Kai Greene: OVERKILL is now available on bodybuilding.com. 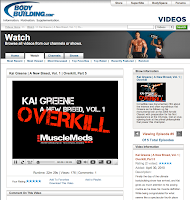 This series has been spectacularly well received.

I'm very proud to say that in less than a month Part 1 has gotten over 40,800 views, beating videos that have been on the site for almost a year.

It is the second most discussed video on the entire site, followed closely by parts 2 and 3!

OVERKILL is the second highest rated video and has also been favorited more times than videos that have spent far longer online.

Thanks to everyone for their kind words and support during the course of this project! There's lots more to come!!
Posted by Mike Pulcinella at 5:23 PM No comments:

Watch ALL of OVERKILL on Bodybuilding.com!

Bodybuilding.com is running my serialization of Kai Greene: OVERKILL!

That means that once a week they are posting, in its entirety, a segment of the documentary on their videos page and I get to say cool TV announcer-ish things like "Previously on OVERKILL..." and "Coming up on OVERKILL..."! 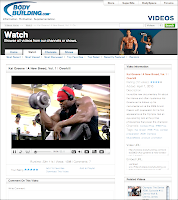 Check all of them out here on a special video homepage made just for OVERKILL!
Posted by Mike Pulcinella at 7:00 AM 2 comments: