What makes a photograph "artistic"?

I think this is one of the best explanations of what makes something artistic that I've ever read!

It was posted by "chubs" over at unrealmuscle.com. Thanks for letting me repost this, chubs!

If a photographer takes a straight shot with good exposure, that's composed pleasantly, we don't generally refer to it as photographic art. He has competently recorded nature and gets credit for skill at a craft, as in this photograph of Mavi Gioia. If a photographer takes consistently accurate, nicely framed shots for an extended period of time, he may earn credit as somewhat of an artist, but still more a craftsman.

As soon as there's intervention from the photographer, a manipulation of realism, the term artist becomes easier to apply. Here, the viewer starts to think of things other than the depiction of nature, thanks to a rearrangement of elements by the photographer.


People look at that picture of Colette and say, that's an "artistic photograph" because it's more than just a recording of nature. If someone consistently produces images like that, over time is considered more an artist than a craftsman. 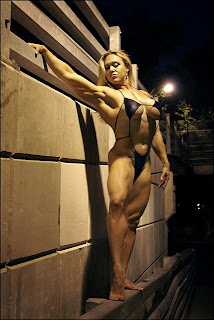 Taken to a further point, like in this wonderful example by Patrick of his lovely wife Emery Miller, the photographer imposes his vision to elicit strong emotional reaction, a hallmark common to all things considered "art" by current societal standards. 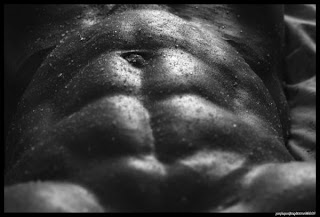 This is Mike again...I'll take it a bit further and say that the third pic is especially artistic because it begins to abstract nature.

The photographer is asking us not only to appreciate the subject for what it IS, but also for the basic geometric play of light and shadow that is occurring. We begin to enjoy it on multiple levels and that also is the hallmark of art.
Posted by Mike Pulcinella at 4:26 PM 2 comments: 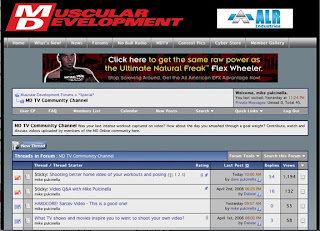 About a month ago I started a thread on the Muscular Development.com discussion forum in order to help the members learn how to make better videos of their workouts and posing. As you can imagine, bodybuilders are generally horrendous videographers! Shooting video of people in the gym has become my forte (quite by accident). My "video tips" thread became popular and the other forum leaders decided that I should be the one to develop a strange hybrid bodybuilding/video section of their forum.

The offer came as a complete surprise. I'm very flattered and excited about it! If you get a chance, stop by and check out "my" section, the MD TV Community Channel. 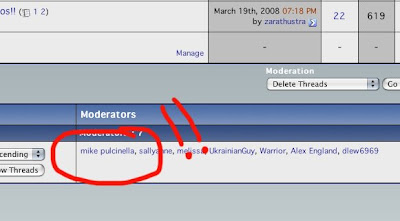