My NO-Bomb commercial with Victor Martinez

MHP supplements has a new bodybuilding product called NO-Bomb. The tag line for the product is "Go Nuclear!" They asked me to create a commercial for it. Inspired by the tag line I created this.

I had a lot of fun doing this. The hardest part was getting my voice to sound like those old-time announcers. The trick was to move away from the microphone...and YELL!
Posted by Mike Pulcinella at 6:04 PM No comments:

Victor Martinez begins his prep for the 2010 Olympia!

MHP supplements has me working on a new project that I'm very excited about!

I've just returned from spending a few days with Victor Martinez in Tampa, Florida as he was consulting with his new trainer Joe McNeal. Joe is a good friend of Dexter Jackson and helped him win the Olympia in 2008. He is a very energetic, knowledgable and inspiring guy with one of the most awesome home gyms I've ever seen!

Please don't envy me. I was in a resort town but it was cold as s**t down there in Florida! I'm from Philadelphia, Vic lives New York. We thought we were going to get a break from the freeze. No such luck! Anyway, I got some great footage and have made a start at understanding Joe's plan for Vic. 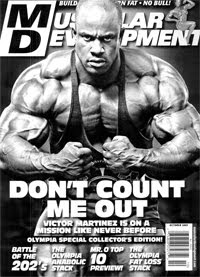 This is going to be a long and difficult year for Victor, but both he and Joe feel that Vic is poised to finally fulfill his potential and become Mr. Olympia. This program is designed to make that happen!

The first step in the process was the decision to skip the Arnold Classic this year. In fact, Joe McNeal refused to take Victor on unless he agreed to this one prerequisite. Joe felt that there just wasn't enough time to make the changes to Vic's physique that needed to be made and that they should set their sights on the O.

Over the course of the next nine months Joe will tweak Victor's workout, diet and supplements, striving to give him the size he needs to compete with Jay and Kai, while maintaining the classic lines that Vic is known for. 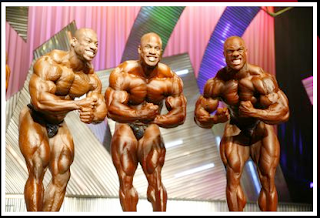 Recent setbacks are in the past. As far as Vic is concerned his knee injury is old news. Although he and his family are still grieving for their recent tragic loss, they are attempting to go on with their lives.

Vic is ready. He's excited! (Well, as excited as Vic can get. He's a very low-key guy! LOL!) It's going to be a very interesting year for bodybuilding and I am honored to be allowed into the inner circle with my camera. I am going to follow this "experiment" throughout the course of the year videotaping when I can. In the end I will produce a DVD for MHP that tells the story of Victor's transformation, and hopefully his triumph, from the inside.

Stay tuned!
Posted by Mike Pulcinella at 8:03 AM 1 comment: