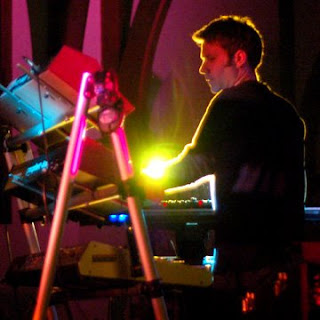 This kind of music isn't for everyone, but if you are a fan of synth-based, meditative "space" music you must check out Baltimore musician Jeff Koepper! I used to dabble in this stuff back in the 80's but never approached Jeff's level. I met him through craig's list and recently sold him some of my old keyboards. As far as I'm concerned they couldn't have gone to a better home! There are some samples on his MySpace page so you can see what I'm talking about.

I love this stuff! You may hear it finding its way into some future video projects of mine!

He's also giving a live concert in Philadelphia on April 19th. I'm not going to miss it!
You can check out more about the concert and his CDs here...

thegatherings.org
Just so you know..."analogue" is a classic type of synthesizer that predates digital. It's the kind of instrument guys like Keith Emerson and Rick Wakeman used to play. By restricting himself to only these kinds of keyboards Jeff Koepper, and others like him, create music that has a distinctive "retro" sound that can't be achieved any other way.
Posted by Mike Pulcinella at 6:13 AM