Most of you know me as a videographer long immersed in the world of bodybuilding. Recently I was given a chance to explore high intensity cross training as part of an assignment to produce workout videos for the new www.MHPXFIT.com website. What I encountered completely changed my mind about what cross training was about and I was even coaxed into trying a workout myself! 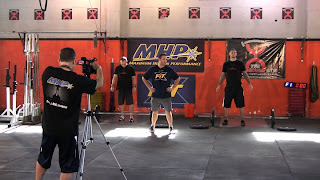 My assignment took me to Fort Lauderdale, Florida to shoot a series of workouts. Fort Lauderdale is known for its spring break craziness, but away from the beach and clubs, in an unassuming industrial section of the city, lies The Playground Gym.

Our host for the video series was the co-owner of The Playground Gym, Joel Feinberg. A former professional golfer and LeMans race car driver, he was now a self described cross training fanatic who is passionate about spreading the word and teaching people about this new form of exercise.

Joel told me, “This training took me from a stalemate where I had been in my regular gym to a new type of fitness. It got to the point where I became addicted to it because it was a higher level of fitness than I had ever experienced.”

So what is High Intensity Cross Training (or HICT) exactly? There are many training styles which fall into this category, but here’s my best definition.

After spending some time in various gyms talking to trainers and enthusiasts and videotaping many workouts, it seems to me that HICT is training system which borrows from many disciplines.

You may see gymnastics, running, lifting (both light and heavy), as well as some unusual exercises like Russian Kettlebells, all in the same session. But the one outstanding feature of all of these workouts is the non-stop nature of the training. That’s what makes it so intense!

As with any kind of training it is important to master the various exercises, but one of the most appealing things to enthusiasts of this kind of training is that it is always different and always a challenge. HITC can be customized nearly an infinite number of ways depending on your particular fitness objectives.

Joel hand picked some of his best athletes for our videos and as we shot I was deeply impressed by their abilities, but even more than that, by their tenacity. Even those who were having trouble with a particular training session never gave up, pushing themselves to the absolute limit of muscular strength and cardio endurance. You will see great examples of this in the forthcoming videos at www.MHPXFIT.com.

While I was there, Joel and Brian, one of the top instructors, began to ask me if I wanted to try cross training myself. There was a group class scheduled during a break in shooting which I could join.

I've been going to the gym my whole life and consider myself in pretty good shape for 50 years old, but I've never done anything as intense as what I was seeing here. I will admit I was a little scared. Would I be able to keep up and more importantly, had I paid my last insurance premium before leaving home?

A bit apprehensive, I agreed. Joel grabbed my camera.

“Oh great!”, I thought, “…my embarrassment captured for posterity!” Well, I guess it was payback for all those times I shot video of people not at their best.

After a warm up and some stretching, the timer beeped its shrill start signal and about a dozen of us began the session.

…for as many non-stop rounds as possible in 16 minutes.

We were to do three non-stop rounds of those three exercises and were allowed to take as much time as we needed to complete this second half of the workout.

It needs to be understood that the instructors were making an exception for me. Newbies are usually not allowed to jump right into a class until they have gone through a training period called an “on-ramp”.

It is essential to master the form of the various movements before engaging in full-on HICT. It's much too tempting to become sloppy trying to complete the rounds while watching the timer out of the corner of your eye, and it makes you much more vulnerable to injury. The frantic pace of the training necessitates a strict adherence to form.

I was somewhat familiar with the exercises from having shot and edited video of them and I was also being watched over by Joel and Brian. They attempted to fix my form as I went along as much as they could.

The workout was also “scaled” for me, meaning it was made easier because I was a beginner. My chest to bar pullups were assisted by a thick rubber band, and I was also able to take the exercises at my own pace, thereby "scaling" it for myself as I went along, depending on how I felt. Still, Joel was relentless in keeping me moving and I found it to be extremely challenging. Okay, I’ll be honest…it was fukin HARD!! 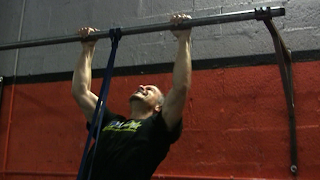 My first mistake was in not pacing myself. I plunged into the first round, proud that I was still physically fit enough to keep up with the others. But after only a couple of rounds I began to get winded. Looking at the clock, only FOUR minutes had elapsed of the sixteen! I was in trouble!

Joel's encouragement helped, but my experience soon became a fight for oxygen. For the most part, my muscles were strong enough to do the movements, but my breath and stamina just wasn't there. I was beginning to understand the difficulty of this kind of training.

Moving much more slowly now, it became very hard not to watch the clock. My less than perfect form was causing a bit of strain in my lower back but the main problem was just catching my breath. A strange focus came over me as my only objective became to just keep moving through the exercises. Minute after minute, the rest of the world fell away. I tried not to think about what lay ahead of me and I was left only with the task of completing each rep.

With two minutes left to go I wanted to quit. I didn’t think I could finish, but Joel wouldn’t allow that. His encouragement kept me going to the final beep of the timer.

I never thought that I would enjoy lying in a puddle of my own sweat on a dirty warehouse floor but when session ended after sixteen minutes I stopped mid burpee, face down, my chest heaving. No fluffy bed ever felt as good as that floor did just then! 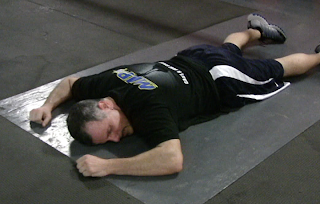 After a minute or two I got up, pacing and stretching a bit to regroup. Five minutes later we were off again.

I had learned my lesson and took things much more slowly this time, jogging instead of running and taking each push-up and kettlebell swing one at a time. Even though I was moving slowly, I ended up on the floor again when it was over! I completed the training feeling drained and shaky but also proud and exhilarated that I had done it and not completely embarrassed myself.

By the end of the experience I felt that I understood a little better what motivates people to push themselves in this way. The world of high intensity training is a welcoming, egalitarian community. People of all skill levels train side by side. Old and young, men and women, the fit and the soon-to-be-fit train together and encourage each other.

The most startling difference from the bodybuilding world I had become accustomed to, is that even though HICT can get you into incredible shape, how you look is secondary to how you perform.

Freed from the self-consciousness of most other pursuits, those who are not yet at their target weight feel comfortable training shirtless. At The PlayGround Gym the members don’t seem to judge each other on their physiques, and that is a comforting feeling for a lot of people. But there IS strong peer pressure to push yourself as hard as you can and the exhilaration of knowing that you did the best you could possibly do is indescribable…and valuable.

Would I do it again?

Yes, I would…and I plan to soon. But I need to take some lessons in the form of some of the exercises (kettlebells especially) and I would definitely scale the workout back for someone of my age and abilities.

I would also alternate HICT workouts with more conventional weight lifting and cardio sessions each week. In fact, at The Playground Gym, you will find many of the members doing exactly that. Most gym members will do the high intensity training sessions about three or four days, and other things the rest of the week.

Joel explains, “A lot of our members at The Playground Gym, myself included, use cross training as an accessory to the other things that they do. My focus is powerlifting right now, but I add in several sessions of HICT just to get my cardio in and keep my stamina up.”

With high intensity cross training you can tailor the workout to your skill and fitness level but the bottom line is, you have to give it your all. A feeling of community, positive encouragement, and the results of your personal accomplishment come together to make an HICT training session very exciting, addictive and hard to beat.

Coming soon I will be posting twenty HICT training videos as well as a short behind the scenes “making of” video that will include my first HICT workout.

Visit www.MHPXFIT.com and register to get updates by email!
Posted by Mike Pulcinella at 1:13 PM No comments: